Angling
The opening day of the salmon angling season was a disappointment for anglers. Overnight temperatures plummeted across the region with a chilly -20oC recorded at Kildrummy on opening morning. Anglers were met with floating grue coming downstream and although a few hardy individuals gave it a go, rod rings were frozen solid after a few casts. The following week saw air temperatures increase to 15c, this caused a sudden thaw which in turn put the river into full flood and halted any angling activity until the 25th. Despite fresh fish being witnessed ascending the weirs in the lower Don only salmon and sea trout kelts were landed for the month. 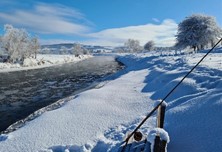 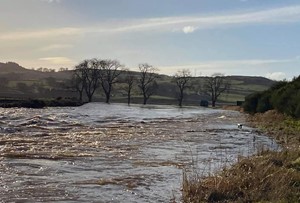 Harvesting of willow for bank protection projects began once again this year although a little later than usual due to the deep lying snow. Once conditions had improved underfoot allowing safe access and working conditions, the fisheries officers made short work of the first batch of willow whips and stakes kindly donated by Ley Estate.
Having harvested and gathered these materials they have been quickly transported to site allowing for the next phase and the real hard work to begin. Posting the bank along the toe of the erosion is the first task, after this is takes shape quickly with weaving or spiling the canes before backfilling with sods and earth to key in the canes and allow them to root and secure the bankside. We will report on the progress of this work over the coming months. 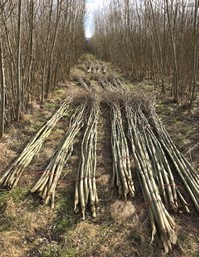 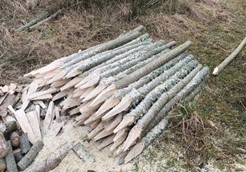 Throughout the month fisheries officer maintained regular foot and vehicle policing patrols across the catchment for any sign of illegal activity. Trail cameras remain in operation at various locations on the river but have so far not revealed any suspicious ongoings. Sustained high – water levels over the latter weeks of the month helped to curb any illegal activity and no incidents were reported. Since the opening of the salmon angling season officers have been patrolling various association and club waters to ensure anglers are in possession of their 2021 fishing permits.